By Sunshine Thomas on September 26, 2013 in Employees and Social Media, First Amendment 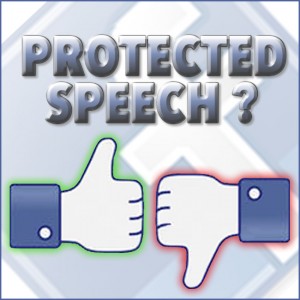 Is “Liking” a Facebook page protected speech under the First Amendment  in the public employment context?

Recently, the Fourth Circuit Court of Appeals in Bland v. Roberts, 12-1671 (4th Cir., September 18, 2013), overturned a District Court decision which held that public employees’ Facebook “Likes” were not protected speech under the First Amendment. In this case, six city employees were terminated from their employment for supporting an opposing candidate in an election. One method used by these employees to show their support for the candidate was by “liking” his Facebook page. The District Court held that this was not protected by the First Amendment and dismissed the Plaintiffs’ claims. In reversing the District Court, the Fourth Circuit noted that other courts have granted First Amendment protection to posts written on Facebook. Here, this was simply a click of the mouse indicating that the user liked a page or a post. Nevertheless, the Fourth Circuit held that there is no constitutional significance between a single mouse click and the typing of a post. The court also went on to describe the action as an internet equivalent of displaying a political sign in your front yard. On this basis, the Fourth Circuit held that a Facebook “like” did constitute speech protected by the First Amendment.

We note, however, that this decision only applies to those states within the Fourth Circuit.  On this basis, this holding is not controlling in Pennsylvania.  However, it is quite possible that other circuits may adopt the reasoning of the Fourth Circuit.  Accordingly, we caution public employers to be careful when taking an adverse employment action based on their employees’ social media activities including, but not limited to, “liking” a Facebook post or page.