By Sunshine Thomas on March 7, 2014 in Employment Statutes 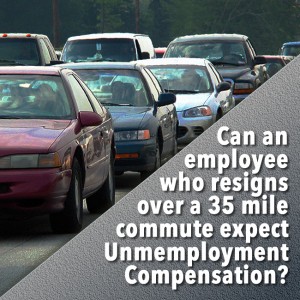 The PA Commonwealth Court has recently confirmed that resigning from one’s job after being transferred to another facility which requires a 35 mile one way commute is not a necessitous and compelling reason so as to be eligible for unemployment compensation benefits. In so holding, the Court cited to prior opinions holding that longer distances in and of themselves are not necessitous and compelling reasons and that the Claimant did not even try the commute and did not explore other options such as carpooling or public transportation.

By Sunshine Thomas on March 5, 2014 in Employees and Social Media

It was recently reported in the news that a gentleman in Miami, Florida who received an $80,000 settlement from his former employer in resolution of an age discrimination claim has now lost those monies after his daughter bragged about the settlement on Facebook. Apparently, the settlement agreement included a confidentiality clause which was breached by the father telling his daughter about the settlement and by her then posting about it on Facebook, which publicized the information to her many “friends” who were affiliated with her father’s former employer. At the end of the day, although we recognize that a confidentiality clause often has limited teeth as the chances of recovering the money are slim even if the clause is breached, this situation provides some optimism for the benefits and effectiveness of confidentiality clauses. However, one thing to keep in mind is that the breach occurred just days after the settlement agreement was signed.